Since we learned of event storming at Procurios it felt like an interesting tool to me. Several teams started experimenting and using it for two main reasons. Getting to know the customers business and helping the customer realise that their business is much more complex than they always assumed.

To help everyone in the company understand what we mean when we talk about event storming Pim and I organised a series of three workshops open to any employee. Bonus? I got three free tries at facilitating and learned loads.

Since I got about 18 interested persons I had the luxury of creating groups. For a while I doubted on how to organise those groups but settled on a broad mix of professions in each group. I feel event storming is most succesfull in two situations: 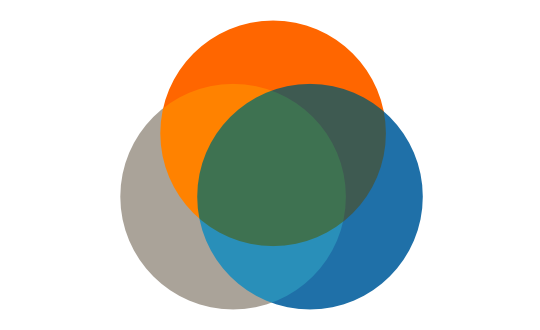 A group that consists of lot of people that are expert on the same narrow field in a business. We're now collecting details. Hopefully friendly fights on how stuff works and should work spontanuously arise. 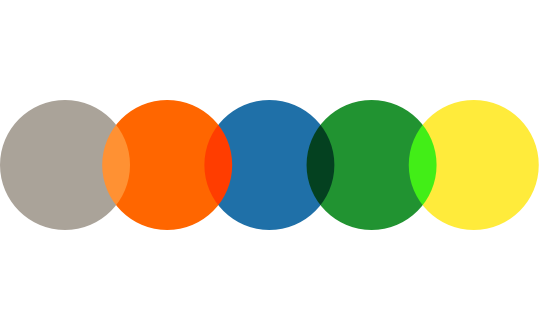 A group that consists of people that have expertise on fields that each touch eachother. Obviously, missing one link makes sure you end up with two groups of people without a connection. Discussion here should hopefully be more like "that is not what we do" and "we only put information X in location Y because there is no other place!".

Groups for my workshops

Since we went for big picture eventstorming I arranged groups according to the second situation. Each session I removed all chairs from the room and put tables, etc to the edge. I prepared the not-so-infinite-but-still-pretty-big modelling space and gave only the shortest of introductions. Since the thing we have in common as a group is that we all work for Procurios, we were eventstorming ourself. Every process allowed. There are big differences between groups and will discribe all 3 sessions and things I learned below.

I was immediately off to a good start. At Procurios, people are pretty much used to stickies on walls so I did not have to help anyone accross the "I am a grown-up important person with very little time, am I really expected to put pink stickies on a wall"-barrier. Within minutes the wall started to get filled. Some people were more hesistant than others but little nudging and correction was required.

Pretty soon a discussion on invoicing emerged. People were clearly of different opinions on some parts of this process. This was great! What was meant to be an exercise in eventstorming actually turned out to be useful on the spot, if only for creating more awareness on issues surrounding this topic. The problem here was that people were reluctant to stop discussing and start writing again. They identified the problem but wanted to create the solution straight away as well.

The second session was so different from the first session. It took people more time to start writing and sticking notes to the wall. Also it was more an individual exercise at the start. It took people about 25 minutes before the started collaborating. The result was a lot of small starts on processes that did not get finished or only got actively discussed much later.

I feel this group had needed  a bit more instruction up front. Since the first group started so fast I felt that I had hit the sweet spot of 'just enough explanation' but in retrospect I think this was luck :) 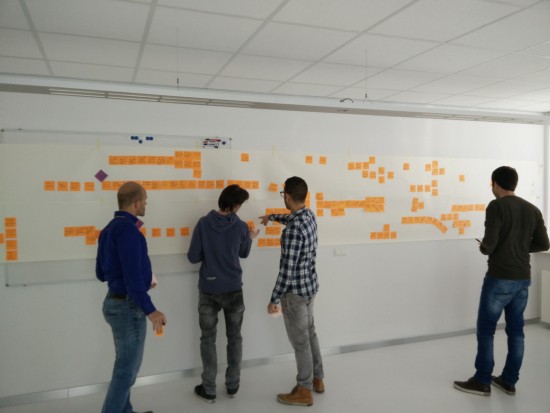 This one had the smallest group of people due to some people being ill. It was also the first session where we experimented with smaller timeboxes. We noticed that we could help and correct people while they were actively event storming but we also lacked a formal retrospectal moment where we could redirect the whole group of people. We can of course shut the process down for a couple of minutes at any time, but since it takes people a while to get started it feels overly interruptive to bother them after only a couple of minutes with the first feedback on the process of event storming itself.

I think I would like to prepare an example (very small, < 10 post-its) of a process that has nothing to do with the current business to give participants an idea of where we're going. I noticed people usually start out really fragmented and only after one or two retrospectives would they start finishing processes and zooming in. In part this may be to the unclear ideas of participants on event storming at the start, so a small example might help.

I think most attendees had some degree of fun and realised the value of this tool for our business. I got to learn a lot more on facilitating so I feel I ticked both boxes in the goals category :) Tickets are apparently a central part in our organisation since that was the one process that got a lot of attention during all three sessions.

What I would love to do next is get developers and designers together and do a design oriented event storming session just to try that out as well. The orange of domain-events only tends to be a bit boring on the eye after all :)

Since I am by no means an expert I would love any tips and tricks or good stories from you all. Leave them in the comments!